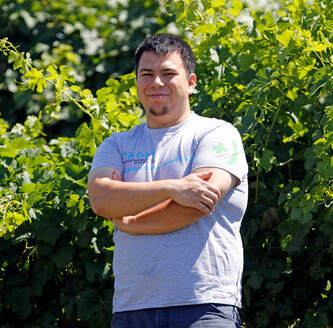 ​Noe Martinez, the cellarmaster at Rasa Vineyards, sat down with us recently to talk about Rasa, his career in the wine industry and his new wine label, Xenolith Vintners. For information on Noe's wines and to join the Xenolith mailing list, go to www.xenolithvintners.com.

WALLA WALLA WINE LIMO: Let’s talk a bit about your background, where you’re from and how you got into wine.

NOE MARTINEZ: I was born in San Francisco, but we moved a lot as a kid; I lived in Guatemala for a couple of years with family down there. I was raised in an Orthodox Jewish household, so when I was nine, we moved to Israel and became Israeli citizens.

NOE: When we moved there it was actually between the Intifada’s. There was five or six years of peace and it was a really great time to live in Israel. We moved from there right around the time that the second Intifada began. From Israel we moved to England, but eventually ended up in Seattle, as my mom [a computer programmer] was working for Amazon. And then I ended up at WSU.

WWWL: How’d you get into wine?

NOE: I was raised in a religious family, so we always had wine for Friday and Saturday dinners. Because I moved so much, I was home schooled and when I was 12 as a chemistry project we learned about fermentation and I made beer and wine. I just thought that was the coolest thing. I became responsible for making the bread for the family every week. And then when I got to WSU at age 16, I started making a lot of beer and wine. I was originally more into beer because at the time I thought that it was a more noble profession (laughs). It wasn’t until I moved to Walla Walla and started going through the wine program at the Community College  that I really developed a love for wine.

WWWL: So how long have you been at your current job at Rasa?

NOE: I’ve been at Rasa since the spring of 2014. I studied under Billo (Rasa Vineyards winemaker) when he was a teacher of Viticulture at the Community College.

WWWL: Where did you work before landing at Rasa?

NOE: I did crush at Garrison Creek in 2009, then I spent a couple of years with Charles Smith Wines. After that I worked crush at Artifex and then I was the Assistant Winemaker at Cougar Crest for three years before coming here.  Mark Hoffmeister was the cellarmaster at Rasa before me and he and I used to sit next to each other in the front of Billo’s class. Mark was leaving and it was a great opportunity and perfect timing for me. It was great because it kept me in Walla Walla and kept my family rooted in this place that we really like – I have a wife and three kids (ages 7, 3 and 1).

WWWL: So how did you end up in Walla Walla in the first place?

NOE: I was living in Pullman and working in restaurants at the time and through a friend I heard about the opportunity for a job at the Whoopemup Hollow Café [in Waitsburg at the time]. I’d heard about the wine program in Walla Walla and there wasn’t a lot of opportunity for advancement in Pullman, so I decided to go where the opportunity was – my first job at Whoopemup was as their dishwasher and I just moved up the ladder. Now, as a cellarmaster it’s kind of like being a glorified dishwasher, but it’s a lot of fun and there’s a lot of glory.

WWWL: That leads to my next question – what exactly does a cellarmaster do?

NOE: Billo, our winemaker at Rasa Vineyards, makes all the winemaking decisions. When the fruit comes in, he tells me what he wants to happen. I’m the one that knows how to make it happen and it’s my job to make sure it happens on time, on his schedule. I also manage the cellar crew here.  My job is to do the best that I can to fulfill Billo’s wishes and needs as far as what he wants to have happen at the winery. And also to be his eyes and ears, tasting the wines constantly and letting him know which wines might be in need of more attention.

WWWL: Tell us about the winemaking philosophy behind the Rasa wines.

NOE: At Rasa we’re really interested in terroir. We’re interested in finding terroir and emphasizing terroir. We work with lots of different vineyards and we look for the best vineyard blocks that we can get a hold of. We try to find out what those vineyard blocks bring to the table – what is it they have to offer and how we can make the wine express itself as best as possible. When we get to the end of the wine’s life cycle in the barrel, we go through blending trials to determine which wines will be used in blends and which will be isolated as single-vineyard.

So to summarize, our winemaking philosophy is sort of “Wait and See”. We bring in fruit we like, we work with the vineyard managers and we sort of let the wine make itself, guiding it slowly through its natural process. And end once we’ve seen what the wine has become and where it’s going then we figure out whether the wine can be bottled on its own or what we need to do to it to put it together. That’s why we have such a broad spectrum of wines – last year we bottled 15 or 16 wines and they came from over 100 different lots, all independently managed and curated.

WWWL: Tell us about the tasting room experience at Rasa. We love bringing people to Rasa because it’s such a unique experience. The guests typically get to interact with the winemaker and learn a bit about the wine and the story behind each of the wines. Billo quite obviously enjoys meeting people and sharing his wine with them.

NOE: That’s true. Until recently the tasting room was right in the production area of the winery, but we moved it so now you can taste the wine without worrying about getting splashed (laughs) and you can actually watch the production going on while you’re tasting our wines.

WWWL: What do you like to drink on a typical night?

NOE: I’ve been drinking a lot of Grenache lately. My favorite wines in the whole world are Châteauneuf-du-Pape , Vieux Telegraphe and Seppeltsfield Port. In the last year there’s really been a nice influx of affordable and delicious Grenache and GSM blends in Washington and I’m really enjoying those. Before I got into Grenache, my go-to was Sauvignon Blanc. It’s dangerous, it drinks like water (laughs).

WWWL: You’ve got 24 hours to live – what bottle in your cellar do you have to open?

NOE: I think it would probably be an ’03 Morrison Lane Syrah. ’02 and ’03 were spectacular vintages for Syrah in Walla Walla. Morrison Lane is an incredible vineyard and I think that ’03 is the bomb. I’ve been holding on to that one for a while, almost afraid to drink it because there’s so little of it left – and once it’s gone it’s gone! It was a beautiful vintage.

WWWL: So you’ve got a new venture, your own wine label, that’s just being released. Tell us about that.

NOE: Yes, it’s called Xenolith Vintners. A Xenolith is a foreign fragment of rock that’s imbedded in another piece of rock. Our first wine is 100% from The Rocks in Milton Freewater. Pretty tiny production for the first vintage, only 30 cases. We don’t have a tasting room, but we will have an event at Fall Release [November 4th from 10am to 2pm] at the Powerhouse Theater. Our website is at www.xenolithvineyards.com. The wine can be purchased at our website and we ship to 36 states or it can be picked up at the event at Fall Release. In order to attend the event, you have to join our mailing list [free to join] and the information on joining the mailing list is also on the website.

WWWL: What’s the price point on the GSM and are there other Xenolith wines in the pipeline?

NOE: It’s $45. There will be other wines, but I’m still working on them. I really only want the best wines to come out with this label. The next releases will probably be a Cab and a Viogner.